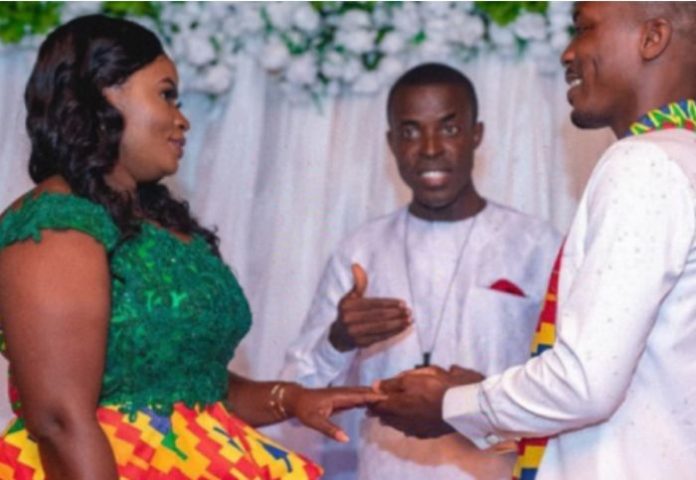 Comic actor, Clement Ashiteye who is popularly known as Clemento Suarez is officially off the market.

The talented comedian of ‘Kejetia vrs Makola’ TV series fame tied the knot with his long time girlfriend identified only as Sylvia who is a Nigerian at a private ceremony.

The traditional event which came on October 24 was attended by the family and close friends of the couple.

READ  Clemento Suarez opens up about his real job aside comedy

His wedding comes as a surprise to some fans on social media with some describing it as a hoax.

Some time ago, his girlfriend disclosed that she has known him for the past four years since they started dating during their days on the University of Ghana campus.

Sylvia who is a student of fine arts and majoring in management revealed she manages her fiance and loves him as a partner despite people’s description of him as fool.

Below are some leaked photos from the event.

SAD Video: Man whips co-worker with a big shovel for snitching on him – Watch

Gospel Musician, Ernest Opoku ‘Chopped’ Me More Than Once – NAYAS Descends Once Again

Osita Iheme a.k.a ‘AKI’ Shares Advice To Fans On How To Be Happy In Life

Public NOTICE: TV Stations In Ghana That Show ‘P. 0. n0’ – Is NCA Aware of This Menace?

Rebecca Bantie - November 13, 2020 0
The West African Examinations Council (WAEC) has released provisional results of candidates who sat for the WASSCE for school candidates in 2020 in Ghana. Graphic...

18+ Video Of Slay Queen, Ernestina Taking ‘Atopa’ From Three Boys In A Pool...

Rebecca Bantie - November 14, 2020 0
If you are very present on Facebook, you will definitely know the girl called Ernestina because she is part of the top slay queens...

The BBC Ghana Staff - May 4, 2020 0
Following the death of the late Kumawood actor, Bishop Bernard Nyarko, a photo of his daughters has surfaced. The two girls posed with their dad...

Rebecca Bantie - July 6, 2020 0
In Ghanaian societies, men are mostly criticized when they turn to go in for a woman or lady with a child or more. With...

Mr Ibu Narrates How He Was Almost Eating Alive In Nigeria

Ikechukwu Obinna - May 29, 2020 0
Celebrated Nollywood star, Mr Ibu known widely for his comic portrayal in movies has revealed how he was almost eaten alive by some cannibals...