Ronaldinho has not had the best time of it in the last couple of months after he was arrested for entering Paraguay with a fake passport.

Having spent a month in prison, the former Ballon d’Or winner was released and will spend the time before his trial under house arrest.

The player has gradually been able to get back to his usual cheery and chatty self in the last month, recently granting his first public interview since his arrest.

Now Ronaldinho has picked a starting eleven of the best footballers he played with.
Perhaps unsurprisingly, Ronaldinho’s team is filled with players who played at one time or another for Barcelona.

The Brazilian enjoyed the most a successful period of his club career at the Catalan giants, where he was acclaimed as the best in the world.

In goal is former Barca keeper Victor Valdes with whom, Ronaldinho spent about five years. 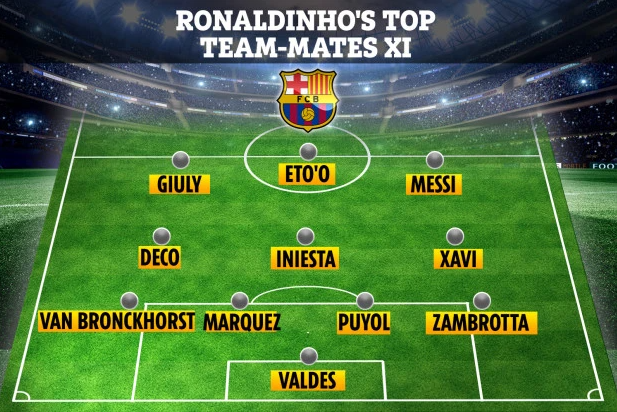 The midfield is a very familiar one, with ever-present Xavi and Iniesta joined by Deco.
In attack, Ronaldinho goes with a front three of Lionel Messi, Samuel Eto’o – who, along with Ronaldinho, formed one of Europe’s deadliest frontlines – and Ludovic Guily.

SAD: Newcastle terminates the contract of Christian Atsu as he played only 10 minutes in the whole EPL season

I nearly retired from football in 2019 – Baba Rahman speaks

PHOTOS: The 3 Candidates Likely To Lead NDC In 2024 If Mahama Refuses To Contest

Video: “Papa No” is not a politician – Actor Ogyam reveals the real identity

The BBC Ghana Staff - August 27, 2020 0
Barely three months to a general election and the most trending topic on Ghanaian social media is “Who is Papa No?”. The name of a...

Sweet Maame Adwoa - September 21, 2020 0
Agbeshie ft Medikal’s WROWROHO has done more harm to the Ghanaian youth than good, judging from the number of viral videos that have popped...

Ghanaians Should Pray and Fast for Nana Konadu Else Another Doom – Prophet Nigel...

I Almost Divorced My Wife At Our Honeymoon – Lawrence Tetteh Reveals

Rebecca Bantie - March 26, 2021 0
The founder and leader of World Miracle Outreach, Dr Lawrence Tetteh has recounted how he almost divorced his wife during their honeymoon. According to the...

Sugar Daddy Allegedly Found Dead In The hostel Of A Side Chick At KNUST,...

Rebecca Bantie - April 23, 2021 0
A married man who went to her hostel to spend the night with his side chick allegedly died after rounds of sex in KNUST. While...