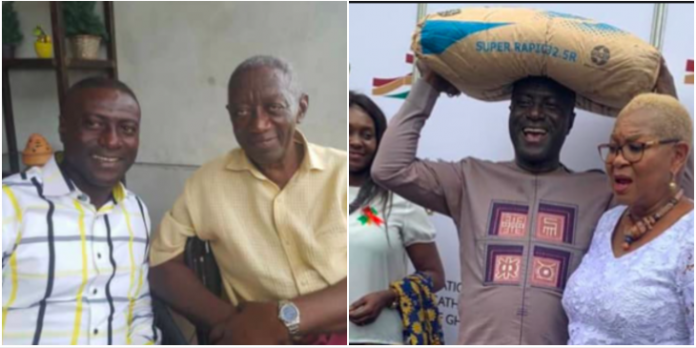 Angel Broadcasting Network (ABN) worker, Charlotte Alhassan, popularly known as Queen Shy has revealed that her former work colleague Captain Smart wasn’t fighting for Ghana as he claims in most of his rants.

According to her, she has been a huge follower of the latter’s program “Fabewoso” where Captain Smart always brings documents to name institutions and government officials running down the country.

Queen Shy narrated that on one occasion, she received a call from a government official who explained to her that he has been named by Captain Smart for defrauding the country and since they are both presenters, he wanted to know if she could help him get in touch with Captain Smart.

Fast forward, she asked another person for Captain Smart’s phone number which he forwarded to that official.

The two later met at an agreed location where the official gave him some huge cash for him to kill the story which he (Captain Smart) did shortly after receiving the money.

She revealed that it didn’t end there as another official also met him on a different date and gave him money to kill a story he was doing about him.

She questioned why someone who claims to be fighting for the development of the country would be taking monies from the people who are causing problems in the country?

I blame my parents for my reckless life – Salma Mumin

Video: “Stonebwoy should bring back OV else depression would kill her” – Ruthy pleads

(Video) Meet Kofi Asante, The White Man Who Speaks Twi Like A ‘Ghanaian’

Rebecca Bantie - May 4, 2020 0
Mr Rauf happened to be a digger who was contracted to dig a building foundation when he met his untimely death, the BBC Ghana...

18+ Video: Kumasi lady drops her number and YaWa video, calls out guys for...

Rebecca Bantie - March 11, 2021 0
Kumasi girls have the finest curved bodies in the world and the best part is that they take pride in showcasing it. They stand out...

Video: Stonebwoy shows massive love to his late mother with a tattoo

Kofi Anokye, PhD - March 22, 2021 0
Reggae Dancehall artiste Stonebwoy has flaunted the huge Tattoo of his Mum on his back in a new video on social media. It could recall...

A Man In The UK Rain Curses On Kwaku Manu For Sleeping With His...

The BBC Ghana Staff - May 31, 2020 0
Hilarious Kumawood actor, Kwaku Manu is in serious hot water as he calls for himself trouble after a viral video of a man believed...