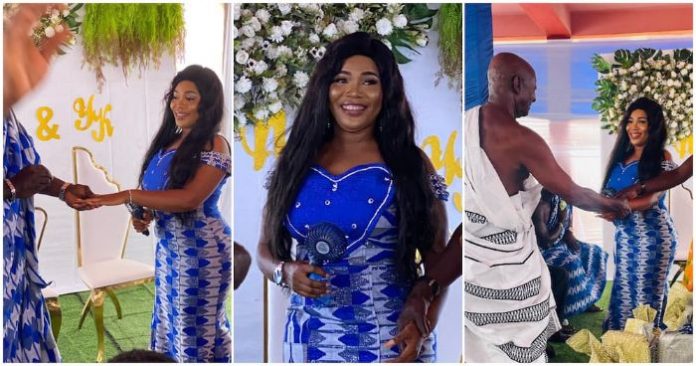 Yaa Kyeraa, radio journalist at Angel Fm has officially been married by her long-distance boyfriend.

Today he’s been sent to the alter by her American man who traveled all the way to Ghana to make their relationship official.

The wedding was expected to happened in December 2021 but Yaa Kyeraa asked for time to make the decision as she wouldn’t want to rush it.

Finally the much awaited wedding is happening live today, May 28, 2022.

Her colleagues at Angel Fm were there to offer their support to the newly wedded bride.

Kofi Anokye, PhD - November 5, 2021 0
Rev. Lawrence Tetteh, founder and leader of President of the Worldwide Miracle Outreach has said that Ghana is doomed if the country doesn’t adhere...

Kofi Anokye, PhD - August 26, 2020 0
In a rather uncomfortable turn out of events, the National Communications Officer of the opposition NDC Sammy Gyamfi has praised the ruling New Patriotic...

Kofi Anokye, PhD - January 7, 2022 0
The Northern Regional Communications Directorate of the New Patriotic Party (NPP) has suspended a member of its communication team indefinitely for allegedly campaigning for...

Rebecca Bantie - July 25, 2020 0
John Dramani Mahama, the 2020 flagbearer of the National Democratic Congress(NDC), has donated motorbikes and laptops to the Regional Office of the NDC to...

Ghanaians call for the removal of Kwaku Agyemang-Manu as Health Minister, saying he’s a...

Kofi Anokye, PhD - August 10, 2021 0
Ghana’s Health Minister Kwaku Agyemang Manu has been under fire in the last few days over the brouhaha on the purchase of the Sputnik...