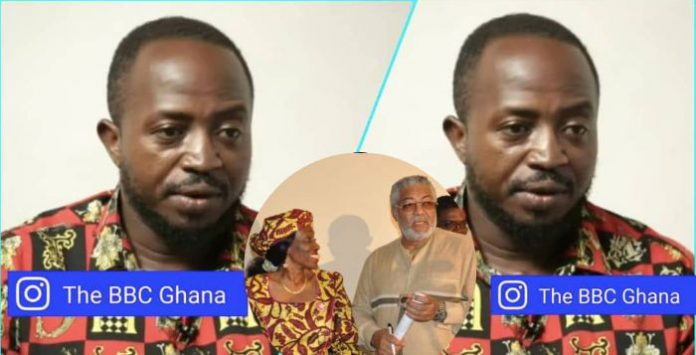 In the aftermath of the death of Ghana’s longest-serving President, Jerry John Rawlings comes a series of new pieces of information from close and distant relations.

A strong member of the NDC’s communication team, Stephen Atubiga who has been making controversial statements following the demise of Flt. Lt. Jerry Rawlings has made another.

According to him, Nana Konadu maltreated Rawlings, the reason why he died prematurely. In his view, he believes all the blames should be directed to the former First Lady.

READ  Video: Breaking up with Shatta Wale is the best decision taken so far – Shatta Michy

Explaining his remarks, Stephen Atubiga in a special convo with Kofi Adoma Nwanwani on Kofi TVs said Nana Konadu Agyemang Rawlings made the late Rawlings passed through hell which contributed immensely to his sudden demise.

He remarked Rawlings was forced to abandon his established NDC party to follow his wife to set up her party – National Democratic Party (NDP). This he said was all part of the inhumane treatment given to Rawlings by his wife when he was alive.

Known to be a man of controversy, Stephen Atubiga over the weekend came under serious bashing following a senseless comment he made on social media in the wake of Rawlings’ death.

In a post, he criticized the family of the late Jerry John Rawlings for going to the Jubilee House to announce the loss of the ex-president without first informing the NDC party.

Hot Video: ‘Akufo Addo is a FAILURE, he has nothing better to offer Ghana’ – #FixTheCountry protestors

SAD: Video of Police constable Sandra on the dancefloor 5-days before she was murdered by boyfriend pops up

Who Say Man No Dey? 5 Policemen struggle to handcuff a driver over license (+ Video

Kofi Anokye, PhD - July 16, 2021 0
26-year-old Wonder Jodocus with Bachelor’s degree in Public Health Nursing yearns for a safer job because he fears for his safety while riding the...

Rebecca Bantie - April 28, 2020 0
Coronavirus cases in Ghana have increased by 121 pushing the tally to 1,671, the Ghana Health Service Directorate has disclosed. According to the Director-General of...

Sonnie Badu Promises To Give Apraku My Daughter A Helping Hand After His Video...

Sweet Maame Adwoa - May 20, 2020 0
Help is coming the way of Emmanuel Kwaku Apraku, affectionately called Apraku My Daughter, who was once the leader of the King Jesus Evangelistic...

Sweet Maame Adwoa - May 6, 2020 0
The poster of the Late Bishop Bernard Nyarko has finally been released as his one-week observation will be observed in Accra around Lakeside and...