Home Entertainment Just One Tonga, You All Dey Chop – Shatta Wale Speaks After... 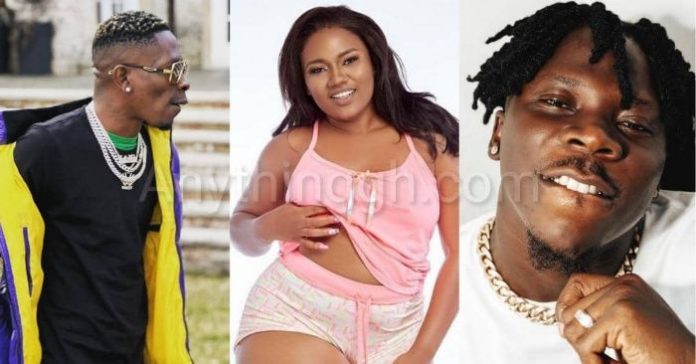 Dancehall artiste Shatta Wale has shaded his colleague/friend Stonebwoy after his name appeared in the new list of Abena Korkor as men who have slept with her claiming his s3kz is wack.

Abena Korkor released another list yesterday and Stonebwoy had his own share of the embarrassment as she claimed to have slept with him and his performance was wack and Shatta Wale reacting to that shaded all the guys who have slept with her.

According to him, just one girl and they all want to chop because she has a problem telling them they are wicked for doing that. He then shaded them asking how much is a hookup that they can’t afford and are always disgracing themselves sleeping with Abena Korkor.

“A lazy man can’t be my friend, I hate lazy men with passion”— McDan

Soldier Catches Wife With Another Man Upon His Return From Camp

Rebecca Bantie - June 13, 2020 0
The Mayor for the Sekondi-Takoradi Metropolitan Assembly, Hon Kobina Kurentsir Sam, has passed on at the University of Ghana Hospital, the BBC Ghana has...

Kofi Anokye, PhD - October 8, 2021 0
Dr Kyeremeh Atuahene, the incumbent Director-General of the Ghana AIDS Commission has asserted that fifty-two (52) Ghanaians got infected with HIV in Ghana every...

I can’t forgive my father for causing me a lot of pain – ...