Controversial Ghanaian actress and social media personality, Lydia Forson has been spotted smoking a substance alleged to be marijuana in a photo that has since gone viral on social media.

Lots of people have lambasted her for sharing such a photo on social media since she serves as a role model to many in the public domain but she seems unfazed.

According to her, she believes it’s her life and she can live anyhow she wants.

Users, who tried to register their displeasure at her post, weren’t spared as she replied them equally.

One user, who goes by the name sika_aburow, asked Miss Forson to delete the photo because it was “highly disgraceful to the public” but she quickly riposted and asked the fan to “delete yourself for being stupid.” (below) 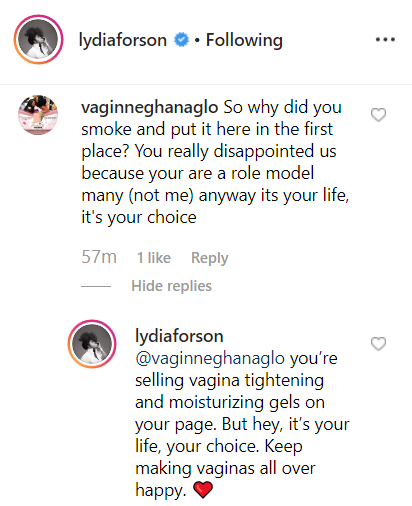 Vaginneghanaglo also queried Lydia Forson saying “So why did you smoke and put it here in the first place? You really disappointed us because your are a role model to many (not me) anyway its your life, it’s your choice.”

But, Miss Forson sarcastically said: “you’re selling vagina tightening and moisturizing gels on your page. But hey, it’s your life, your choice. Keep making vaginas all over happy. ❤️” (below) 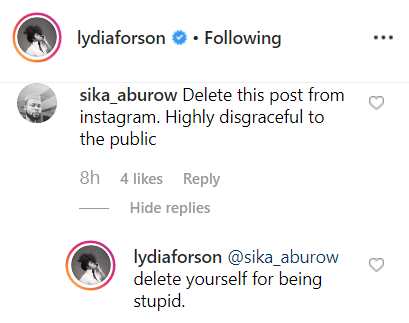 Golden Tulip not sold but leased for 12 years – Mgt

Ghana needs Rastafarian President to save the country – Ras Kuuku

The people in my area are begging me to become their MP – Asamoah...

Rebecca Bantie - June 1, 2020 0
Ghanaian footballer Asamoah Gyan has over the years been very good to the people of Weija-Gbawe where he lives as he continues to make...

Nothing came from dating guys of my age – Kafui Danku defends why she...

Kofi Anokye, PhD - March 12, 2022 0
Kafui Danku is silencing her critics once again about her decision to settle for her Canadian husband despite the age gap between them. The Ghanaian...

Kofi Anokye, PhD - January 28, 2022 0
A sugar boy in his late 20s had his manhood locked in a married lady during a passionate sexual encounter. Apparently, the gentleman snuck into...

Kofi Anokye, PhD - May 15, 2020 0
Rapper Medikal has unleashed some deadly bars in his new diss song dubbed ‘Nonsense’, throwing shots at some Ghanaian celebrities. The rapper in his song...

‘Go find a husband and stop this nonsense’ – Yvonne Nelson told for advising...

Kofi Anokye, PhD - June 4, 2022 0
Actress Yvonne Nelson has been called out for her comments in which she advised women not to have plastic surgery to suit any male. Yvonne...