Home Entertainment My Benin Girlfriend Threatened To Lock Me In A Bottle If I...

A scared Nigerian boy has taken to micro blogging platform, Twitter to open up on how his girlfriend threatened to lock him in a bottle.

The boy identified as “Manlike_sammy” recounted his experience with his girlfriend who hails from Benin, Nigeria after he confronted her.

“Manlike_sammy”, said in a tweet that the lady “whom he dated while in the university” was being flirtatious and when he tried airing his grouse to her, she didn’t let him finish before she dropped a hot slap on his cheek.

He went on to reveal that the girl —who is now his ex— had at the time, also threatened to lock him in a bottle if he dares break up because of the situation.

“I remembered when I was dating this Benin girl back then at the university. I told her I’m not comfortable with the relationship because of the way she was flirting with other guys before I finished talking she gave me what I called a shout hard slap on my left cheek and went on to say despite her flirting she still loves me and if I dare end the relationship she will lock me inside a bottle.” 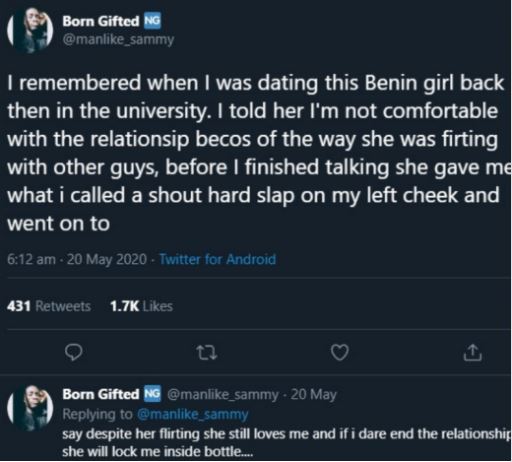 Video: My Father Once Cursed Me To Die Because of My Profession – Archbishop...

Kofi Anokye, PhD - June 10, 2020 0
The youngest son of Duncan Williams has got onliners talking after he leaked his indecent video and followed it up with a more disturbing...

Ghanaian teachers must rally behind Teacher Kwadwo to effect the change they need –...

Kofi Anokye, PhD - August 18, 2021 0
I’ve been following all the buzz around Micheal Owusu Afriyie who goes by the moniker, Teacher Kwadwo. I am not only following the proceedings from...

Actor Osei Tutu was killed by Ada woman who he defrauded through his fake...

Kofi Anokye, PhD - June 9, 2022 0
New development to the sad demise of Kumawood actor Osei Tutu reveals he was killed by a disgruntled woman from Ada who got angry...

Rebecca Bantie - September 21, 2021 0
A Woman Who Wants Prosperity In Life Should Never Do This - Bishop Ajagurajah The founder and leader of Universal Spiritual Outreach, Bishop Kwabena Boakye...

Rebecca Bantie - April 27, 2020 0
The Volta Regional Environmental Health Office has said it would close down the “Lizz Dee” shopping mall in Ho for allegedly refusing to comply...