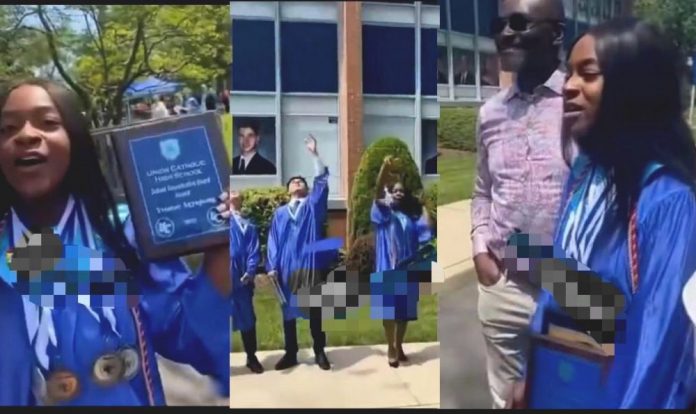 Assin Central Member of Parliament on the ticket of the ruling New Patriotic Party (NPP),  Honorable Kennedy Agyapong’s daughter has made his father proud by graduating as the best in her class.

Yvonne Agyapong, the young daughter of Kennedy Agyapong has made her father proud by graduating as the best store to in her class.

Union Catholic High School In New Jersey in USA had their graduation ceremony today and Yvonne Agyapong bagged 7 out of the 8 honors.

She was the best in Mathematics, Best In English, Spanish, Social Students and 3 other subjects.

CEO of Net 2 Television and Afrochela, Ken Agyapong Junior was present to celebrate his young sister whom he calls Young Genus.

“A lazy man can’t be my friend, I hate lazy men with passion”— McDan

Soldier Catches Wife With Another Man Upon His Return From Camp

Rebecca Bantie - April 26, 2020 0
Paris-Saint-Germain superstar Neymar could be on his way back to the Spanish La Liga this time around to join Real Madrid who is bitter...

Achimota Rasta Case: “Let your children wear any hairstyle you like to school” –...