This was after the students accused their school authorities of being too strict during the supervision of their first paper.

While demanding that the headmaster leaves the examination hall, they also alleged that Mr. Francis Awuah has been manhandling some students and teachers during the exams.

According to them, the headmaster had slapped a teacher and also abused other students who were sitting for the examination.

Some students after the first part of the Integrated Science paper, marched to the office of the District Chief Executive, Samuel Addai Agyekum to report their headmaster’s misbehaviour.

It took the intervention of both political and traditional authorities to restore calm and get the students to rescind their decision. The confusion also caused the writing of the second part of the paper to delay.

Others who remained on campus refused to take food served at the dining hall. They also toppled furniture and food served in protest against their headmaster. The police were subsequently brought in to restore calm and order. 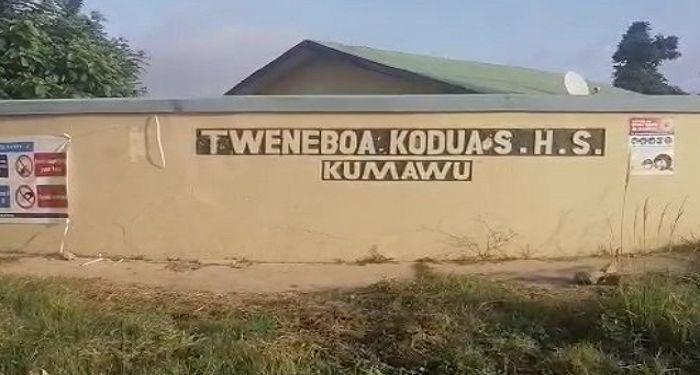 Now, The BBC Ghana’s intelligent unit led by Kofi Anokye PhD has made thorough grounds check and per the findings, some of the finalists especially the boys have vowed to pay back their heartless headmaster in his own coins.

That is to say, they will descend heavily on him after their last paper because the headmaster is trying his possible best to make them fail the WASSCE reason why he (Mr. Francis Awua) has been too strict with invigilation.

So, The BBC Ghana is taking this opportunity to send a word of caution to the incumbent headmaster of Tweneboah Kodua Senior High School to be very vigilant else doom awaits him right after the last WASSCE paper.

Amid Nurses Strike,Ministry of Education Sends A Good News To Both Private and Public School Teachers

Kofi Anokye, PhD - May 12, 2020 0
Nana Top Kay, estranged friend of Kwadwo Nkansah Lilwin, has been captured in a viral warning the “evil” ways of the Weezy Empire boss.  This...

Rebecca Bantie - May 11, 2020 0
The Plan International Ghana has observed that the Coronavirus Disease (COVID-19) pandemic in the country could have a dire influence on teenage pregnancy and...

Kofi Anokye, PhD - May 24, 2020 0
Popular Nollywood actress who is multifaceted in her roles has given a blogger the embarrassment of his life by setting records straight on who...

Sweet Maame Adwoa - July 9, 2020 0
John Dramani Mahama, flagbearer of NDC, has accused the ruling New Patriotic Party (NPP) of creating tension and division in the country. Speaking at the...