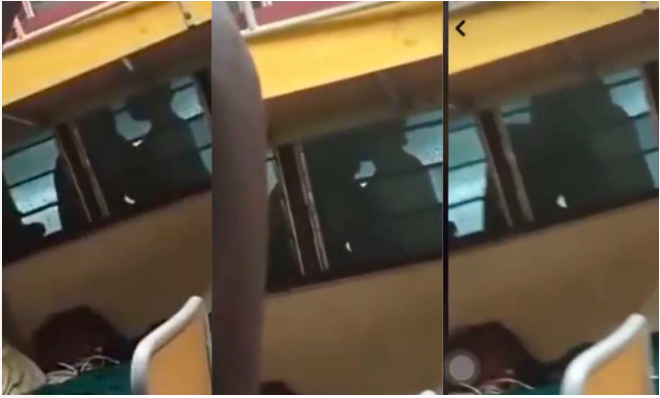 18+ Video: University Of Ghana Student Records Her Friend While Screaming Romantically During Sêx In Hostel

The rate at which sexual immoralities are filling the tertiary institutions is becoming rampant passing day with its own issues.

Either students are being caught in the act of s-e-.x or twerking or better still, their bathroom videos get leaked.

A video going viral shows the moments some Legon students were recorded on video where the screams of the lady could be heard all through the hostel as she got banged by her boyfriend in bed.

In the process, the roommate got up and begun recording what was going on as she could not bear the sounds that were produced.

READ  SAD: I invested huge in a guy but dumped me for a prostitute – Shugatiti (+ Video

The act however was seen to be taking place in a mosquito net that was set around the double bed.

Mad rush for pono movie audition after American company stormed Ghana to recruit actors, each to earn over ₵400,000

List Of Ghanaian Celebrities Who Were Killed By Fake News

Video: Two Soldiers Save Funny Face After He Tried To Kill Himself Once Again

‘It’s Stupidity To Donate 50,000ghc To Build National Cathedral While Zongo Is In A Mess’ – Twene Jonas Attacks Chief Imam

Even If You Drink All The Sea Water, We Will Still Build The Cathedral – Mustapha

Cheating husband made to twerk after he was caught b.0nking another man’s wife – Watch

SAD Video: They asked me to bring my precious mother and I refused – Sakawa boy goes mad

Rebecca Bantie - March 29, 2021 0
Jay bhad is a member of asakaa boys who are very good in doing drill songs. In a viral video that has surfaced online...

“I’m Still Single Because I Have Not Met The Man Who Is Capable Of...

Sweet Maame Adwoa - October 16, 2020 0
A social media user by name Aisha Mariam has disclosed on social media why she is still single. According to the naturally gifted beautiful lady,...

I don’t have to visit GHAMRO and MUSIGA office before they do the right...

Rebecca Bantie - January 26, 2021 0
Security operatives on duty at the foyer of the Accra International Conference Center, where the remains of the late president JJ Rawlings has been...