Former Sunderland striker Asamoah Gyan has threatened to sue a Ghanaian blogger for publishing fake quotes linked to him. 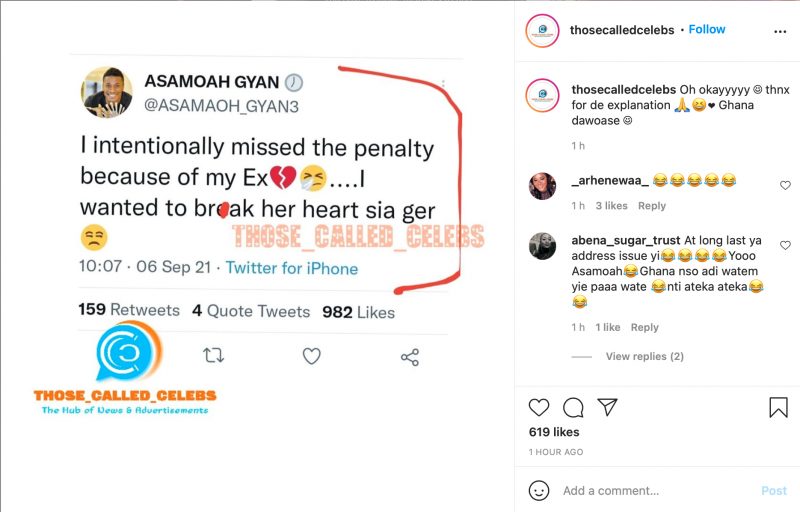 “I intentionally missed the penalty because of my ex…I wanted to break her heart” the fake Asamoah Gyan on Twitter tweeted.

The blogger without checking started sharing the fake quotes and that has got Asamoah Gyan, who now plays his club football in Ghana for Legon Cities, angry.

‘Those called Celeb! pull this useless story linked to me down and retract with an apology with immediate effect, if you fail to do that within the next 3hrs, you will hear from my lawyers. This abuse in social media must stop 🛑My account is verified on Twitter… your work as a journalist involves due diligence,” Asamoah Gyan captioned a screenshot of the post on his Instagram.

In 2010, Gyan missed a penalty kick in the quarter-final of the 2010 FIFA World Cup against Uruguay. The miss cost Ghana and Africa a first semi-final appearance at the global showpiece.

“Till today, any time alone, it still haunts me. Sometimes I feel like the world should go back again so I can redeem myself, but I know this is something that will haunt me for the rest of my life. I accept that because there is nothing I can do about it. I went there to save my country, but I ended up being the villain, which I accept because I know how people feel,” the 34-year old told TV3 Ghana in an interview in April 2010.

Gyan is gunning for a place in Ghana’s squad for next year’s Africa Cup of Nations tournament in Cameroon.

Black Stars arrived in Ghana at 3am today; players shamefully sneaked into their homes

Regina Daniels Reacts After Being Backlashed For Pushing Her PA Into Water – Says...

Ikechukwu Obinna - July 26, 2020 0
Young mother Regina Daniels has finally explained the reason why she pushed her PA into a swimming pool and how she felt afterward. According to...

Pastor Degraft Mintah - May 14, 2020 0
The Municipal Chief Executive (MCE) for Tano South, Mr Collins Offinam Takyi, has confirmed that, the Ahafo Region has recorded its first case of...

Rebecca Bantie - July 4, 2020 0
Nigerian actress and fresh mother, Regina Daniels, has shared never heard tales about how she met her soulmate, Ned Nwoko. Regina Daniels who has on...

Ghanaians Shall See The ‘Devil’ After The 2020 Elections – Pastor Mensa Otabil Shockingly...

Pastor Degraft Mintah - August 4, 2020 0
The founder, and leader of the International Central Gospel Church (ICGC) which is headquartered in Accra, Pastor Mensa Otabil has revealed the aftermath of...

2021 AFCON: Ghana to miss star midfielder Mohammed Kudus as he jets off to...

Rebecca Bantie - January 3, 2022 0
The Black Stars will be without star midfielder Mohammed Kudus for the 2021 Africa Cup of Nations tournament. The 21-year-old was named in Milovan Rajevac’s...