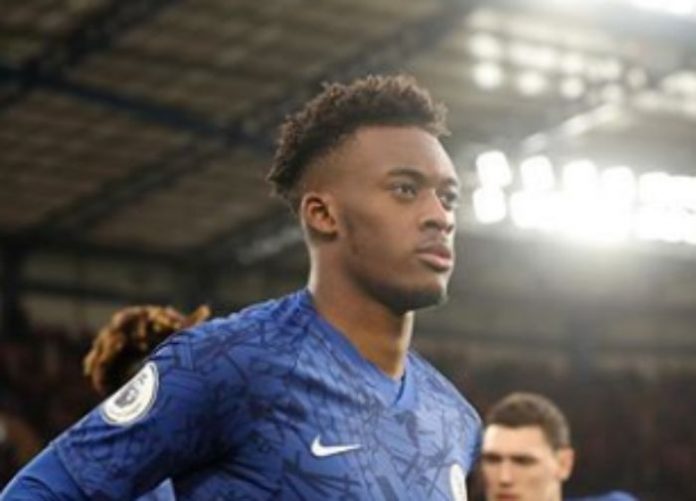 Reports from the BBC indicates that Chelsea forward Callum Hudson-Odoi has been arrested at 4 am on Sunday after breaking lockdown rules and following a reported argument with a woman.

The Sun newspaper report that Hudson-Odoi was visited by the police after the woman he was with had rung the police and also called for an ambulance.

The Paramedics also came to the player’s home, and the woman went to the hospital after ‘complaining of feeling unwell’.

London Metropolitan police issued a statement regarding the incident:

“Police and London Ambulance Service were called at 03:53hrs on Sunday 17 May to a report of an unwell woman.”

The London police have confirmed that the man arrested remained in police custody.

SAD: Newcastle terminates the contract of Christian Atsu as he played only 10 minutes in the whole EPL season

I nearly retired from football in 2019 – Baba Rahman speaks

PHOTOS: The 3 Candidates Likely To Lead NDC In 2024 If Mahama Refuses To Contest

Photos: Man Caught for Stealing Sardines and Hiding Them in Boxer Shorts at Mall

Ikechukwu Obinna - September 2, 2020 0
The economy in Nigeria has become so hard, but man must survive in every means a necessary as in the case of this young...

Video: Lilwin endorses Yaw Ray as the next biggest musician to come from Kumasi

The BBC Ghana Staff - August 21, 2020 0
One won’t be far from right to say that music in the Ashanti regional capital, Kumasi is dead considering the fact that all artistes...

Sad Video: Woman Goes MAD After Talking To A Mad Woman In Kumasi-Bantama

Rebecca Bantie - July 20, 2020 0
News reaching TheBBCghana.Com is that a woman who came shopping at the Bantama market in Kumasi has gone mad after sighting an already madwoman...

Sarkodie, Samini and Stonebwoy are part of my next album – Shatta Wale

Sweet Maame Adwoa - June 17, 2020 0
Shatta Wale who has had a long rivalry with Samini, Stonebwoy and Sarkodie has disclosed that he is planning on putting them on his...