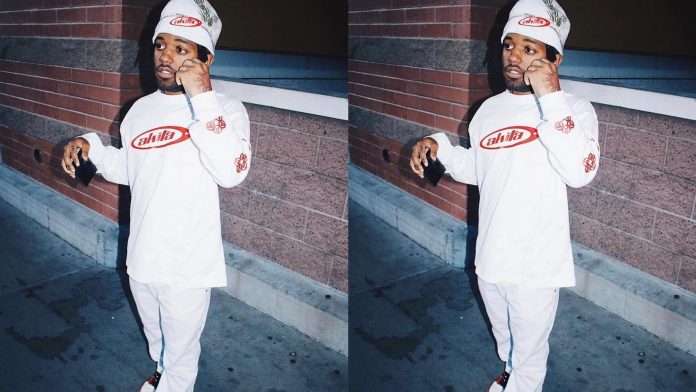 MadeinTYO born Malcolm Jamaal Davis is an American, singer, rapper and songwriter. He was born on the 12th of April, 1992 in Honolulu, Hawaii, United States of America.

He became famous in the year 2016 when he featured Travis Scott on the remix of his song “Uber Everywhere”.

Below is a biography of MadeinTYO.

He was born Malcolm Jamaal Davis but he goes by the stage name MadeinTYO pronounced Made in Tokyo.

MadeinTYO has made quite a fortune from his music career. He is estimated to be worth $2 million.

MadeinTYO was from a military home. He moved around and lived areas such as Virginia, New York, California, Texas, Hawaii and Texas. He later moved to Tokyo in Japan where he spent most of his teenage years.

See also  SAD: 'Church Ushers Used To Drag Me To Children’s Service Due To My Dwarfism Meanwhile I was Above 20yrs' – Don Little

When he came back from Tokyo, Japan, he moved to Atlanta, Georgia to stay with his older brother; 24hrs who is an influence in his music career.

MadeinTYO began dating Anhia Santana; a Philadelphia based painter and digital artist known as Distortedd, in the year 2015.

The couple had a baby boy on the 29th of January, 2017. They announced their engagement on Val’s day 2017 but it was later called off.

He currently lives in Los Angeles, California with his son.

He was born in Honolulu, Hawaii, United States of America.

He released his debut single called “Uber Everywhere” on the 26th of February,2016 on the Commission Music and Private Club Records.

The single peaked on the Billboard Hot 100 and urban radio; number 51 and number 10. He featured Travis Scott on the remix of the song.

The song was certified double platinum by the Recording Industry Association of America(RIAA) shortly after. MadeinTYO went on to release the singles “I Want” which featured 2 Chains and “Skateboard P” which were also certified gold and platinum respectively by the RIAA.

The remix of the song Skateboard P was released on the 4th of November, 2016. He released his debut mixtape titled You Are Forgiven in April of the year 2016.

The mixtape peaked at number 122 on the Billboard 200 chart. He was one of the top five most-streamed new artists in the year 2016 on Spotify.

He released the EPs 24hrs in Tokyo which featured his brother, 24hrs and True’s World in the years 2016 and 2017 respectively.

He released the single “Ned Flanders” which featured ASAP Ferg on the 1st of June, 2018. The song was the lead single for his debut album, Sincerely, Tokyo, which was released on the 26th of October, 2018.

The second album called Never Forgotten was released on the 30th of October, 2020. He cited M.I.A, Gucci Mane, 24hrs and Pharrell as influences in his rap journey.

He has released a lot of classic tunes over the years notably: Nedflanders, WAM, Love Me, HUNNIDOLLA, I Want, Skateboard P, Uber Everywhere, Chucky Cheese, Margiela Man among many others.

Let’s check out the official video of Love Myself below:

His username on Instagram is @madeintyo, @madeintyo on Twitter and MadeinTYO on Facebook. He occasionally shares photos on his platform to keep his fans updated on his lifestyle.

Kofi Anokye, PhD - August 21, 2020 0
Kumawood actress Benedicta Gafah has denied ever sleeping with Prophet Angel Obinim as alleged by outspoken NPP MP Kennedy Agyapong. According to Gafah, she has...

90% of Senior High Schools In Ghana Are Now Connected To Free Wi-Fi –...

Kofi Anokye, PhD - February 16, 2021 0
Minister-designate of Communication and digitalisation, Ursula Owusu-Ekuful, has announced that 90 per cent of Senior High Schools in Ghana have been connected to free...

The easiest way to become unemployed in Ghana is to go to the University...

Kofi Anokye, PhD - August 18, 2021 0
Professor Godfred A. Bokpin of the University of Ghana Business School fame has postulated that the easiest way to end up being unemployed in...

The BBC Ghana Staff - October 20, 2020 0
The New Patriotic Party's (NPP) candidate, Nana Addo Dankwa Akufo-Addo will be on top of the ballot paper in the December 7 election. The NPP...

“Don’t date a beautiful Ghanaian nurse if you want peace in your life” –...

Kofi Anokye, PhD - March 10, 2022 0
Female nurses in Ghana are currently characterized as being high maintenance or promiscuous, which is unfair. The way people see a woman changes when she...