Home News Deploying military to intimidate Voltarians is a way of declaring war –...

Former President of Ghana, John Dramani Mahama has taken on President Akufo-Addo over the presence of the military in some regions especially Volta region which is NDC’s stronghold.

The government’s decision to deploy military men to Ghana’s land border to prevent people they call foreigners from entering the country to register has caused controversy on both traditional and social media.

Whiles members of the opposition see it as a ploy to intimidate residents in their stronghold for the forthcoming compilation of new voter register, government communicators say the military is there to protect the land borders of the country.

The leader of the opposition, Ex-President Mahama has released a statement to condemn the President. Below is John Dramani Mahama’s take on the action of the President;

“To send troops into regions in times of peace for the sole purpose of preventing them from registration amounts to declaring war on them. Any President doing this commits a grave sin against the very people he swore to protect.” 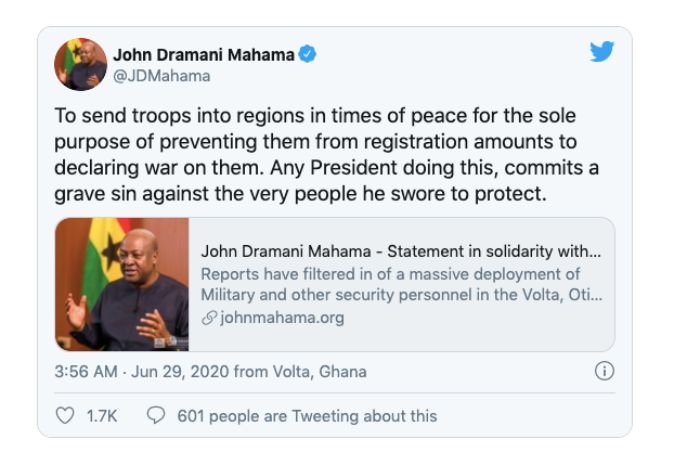 What If Coronavirus Is A Blessing In Disguise?

Rebecca Bantie - April 25, 2020 0
Over the last few weeks, I have read countless stories that seem to suggest that coronavirus is the disease that would finally bring Africa...

Rebecca Bantie - April 4, 2022 0
If you are wondering how it feels like having a live chicken under someone’s pants, wonder no more, a young man was found with...