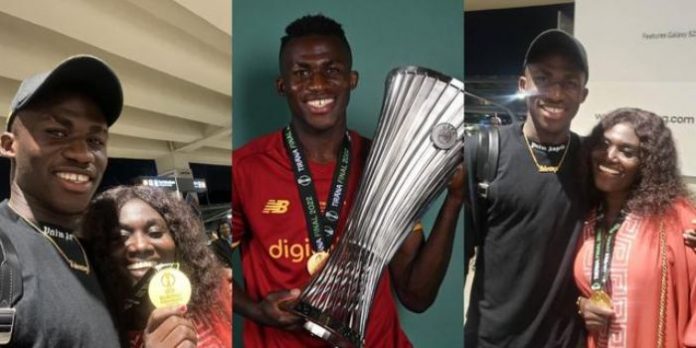 Afena Gyan has presented his Uefa Confession League medal to his mother on his return to Ghana.

Uefa Conference League winning striker Felix Afena Gyan has returned to Ghana and has given his medal to his mother.

Having finished his first professional season with a major European trophy, he’s returned back to Ghana for national assignment with Ghana Black Stars.

At the Kotoka International Airport in Accra, his beloved mother was there to welcome him.

The 19-year-old striker handed over his Uefa Europa Conference League medal to his mother.

He’s already joined the Ghana Black Stars camp in Cape Coast for the game against Madagascar scheduled for Wednesday, June 1, 2022.

A woman forced me convert to Muslim – Thomas Partey

Roma vs Feyenoord: Don’t miss the thrilling stand-off of the Conference League finals!

“We sacrificed 7 mẩd people to win the FIFA Under 20 World Cup in...

Rebecca Bantie - July 18, 2020 0
Vice President Bawumia has gone to the aide of an 80-year-old woman who begged the public to support her as she had been left...

“Corrupt Akufo Addo cannot do anything about corruption” – Captain Smart

Kofi Anokye, PhD - June 3, 2020 0
Comedian and actor Lilwin has proven countless times that he is the most versatile Ghanaian comedian of our time. In a most recent post on...

Kwame A Plus exposes Kojo Oppong Nkrumah for sleeping with Legon girls and sugar...

The BBC Ghana Staff - August 15, 2020 0
Moments ago, we shared a video here on how Information Minister, Kojo Oppong Nkrumah used the trending “Papa No” term in parliament. The “Papa No”...