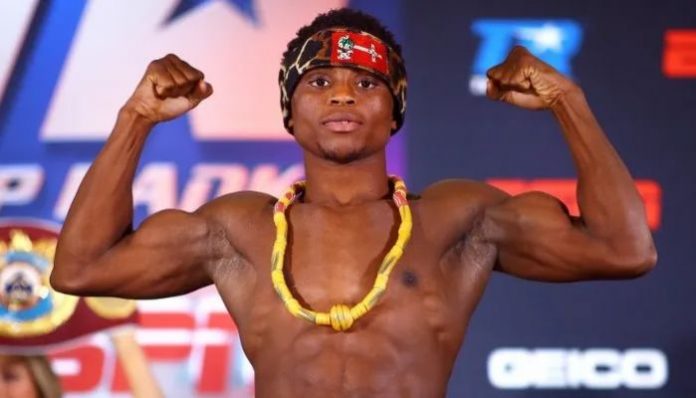 Dogboe announced this in Accra ahead of his 23rd July fight against Joet Gonzalez.

It’s the “Quiet Storm” versus a “Royal Storm,” a can’t-miss featherweight matchup with a title shot on the line. Two-time world title challenger Joet Gonzalez will take on former junior featherweight world champion Isaac “Royal Storm” Dogboe in a 10-round main event Saturday, July 23, at Grand Casino Hinckley in Hinckley, Minnesota. Gonzalez will put his WBO International belt on the line, with the fight also serving as a WBC world title eliminator.

In the 10-round lightweight co-feature, undefeated contender Giovanni “El Cabron” Cabrera hopes for a signature win against the flashy Gabriel Flores Jr.

Gonzalez-Dogboe, Cabrera-Flores and undercard bouts will stream live and exclusively in the U.S. on ESPN+.

Ottoo Addo should be replaced with Chris Hughton, he doesn’t even know his first 11 – Supper Obondede

Video: Asamoah Gyan is NOT serious – Super Obondede fumes over Gyan’s wish to go to Qatar

VIDEO: Kumasi sports journalists present news like a tiger is running after them – Kwabena Agyepong

President Akuffo Addo Has Been Flown Out Of The Country For Coronavirus Treatment: Eugene...

Rebecca Bantie - July 5, 2020 0
The Director of Communications at the office of the President, Eugene Arhin has debunked rumours that the President has been flown out of the...

List Of 5 Young Nigerian Celebs Who Married Rich Men Old Enough To Be...

Rebecca Bantie - July 1, 2020 0
People contract marriages because of other factors aside from love. We can’t tell if these Nigerian women, some of whom are celebs married these...

Ghanaian lady mєrcilessly lashes the hell out of her boyfriend over cheating – Sad...

Kofi Anokye, PhD - December 17, 2021 0
A cheating young man has learned the hard lessons in life after throwing his four-year-old relationship to the gutters, thanks to his wandering crotch. In...