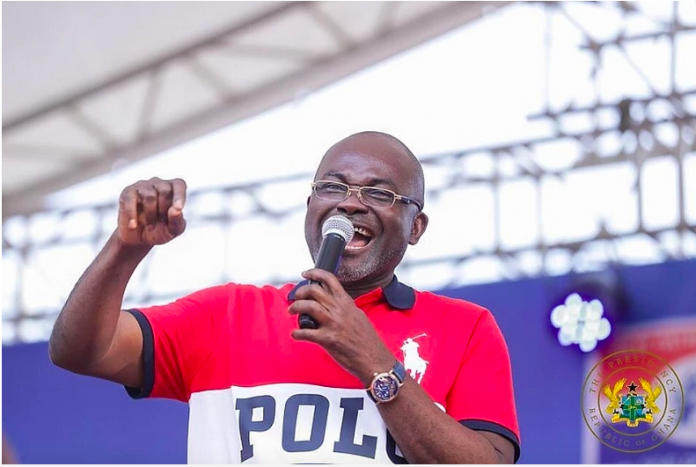 Assin Central Member of Parliament (MP), Kennedy Ohene Agyapong has said he would draw salaries from the state when he becomes the President of Ghana.

In an exclusive interview announcing his intention to run for the flagbearership slot of his political party, NPP, the Law maker said he intends to donate his salary to the state as according to him, he has too much money to take good care of himself.

Ken Agyapong who has been an MP since the year 2000 when he contested on the ticket of the NPP in Assin Central has been the favourite of the youth due to words of encouragement he offers them.

The firebrand said he would rather establish presidential scholarships for Ghanaian youth when he becomes the country’s leader in the near future.

“I will establish what we will call presidential scholarship with my salary. I mean my salary will be used to fund the scholarship for the poor but needy in society especially in the rural areas…,” he added.

Ofori Atta dozes off in parliament; Ghanaians call for his immediate sack

This Is What Is Saw About Ghana and It is Happening In The Next Two Weeks; Prophet Amoako Atta Drops Wild Prophecy -WATCH

Mahama spent GHc1.7 million on election collation but no results to show – Stephen...

Kofi Anokye, PhD - March 12, 2021 0
It has come to light that the National Democratic Congress (NDC) spent a whopping GHC 1.7 million on its IT team that was tasked...

Rebecca Bantie - November 13, 2020 0
In a hilarious turn of event, a Kenyan English scholar has marked Nana Addo’s statement he released on the death of JJ Rawlings. This Kenyan...

The BBC Ghana Staff - July 24, 2020 0
Despite being banned from a number of media houses in the country, Counsellor George Lutterodt seems unperturbed and resolute in his manner of counselling. Speaking...