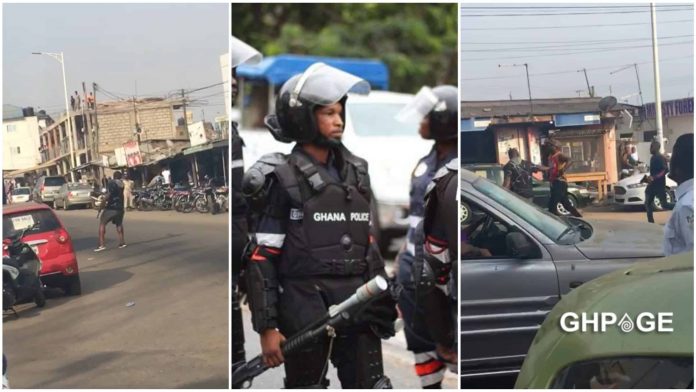 Seven people have been arrested by the Ghana Police Service in connection with a shootout in Nima, Ghana, on Tuesday between two groups of people.

A police officer is guarding five of the suspects, and two are being treated in a hospital under the watchful eye of a police officer.

All the leaders of two gangs that are called Kumordzi and Bombon are also being sought by the police.

See also  Ajumako to get University on its own – John Mahama

Appiah, one of the people who were hurt, is being treated at 37 Military Hospital in the city.

He said, “Nima was hit by a huge wave of violence around 3:30 pm yesterday [Tuesday], and the police quickly intervened. They were able to stop the violence.” Violence spread to some parts of Nima, but we were able to stabilize the situation.

Hell breaks lose in Nima as youth clash on the streets…#nima pic.twitter.com/OTY9avSJAf

“7 persons have been arrested. 5 are presently here with us, and the other two are on admission at the Police hospital.”

He also stated that the police are working hard to catch all criminals in Nima and its surrounding areas.

The Police Service shared a video on Facebook of a group of men wielding machetes walking down a street in Nima, while some fired gunshots into the air.

In a social media post, the Police Department also stated that it had strongly intervened and contained the violence.

Had it not been me, Akufo-Addo would’ve died like a chicken in 2006 — Captain Smart

Rebecca Bantie - November 4, 2020 0
New photos shared by actress and TV personality Benedicta Gafah has confused fans who always run to her page to claim she has a...

Rebecca Bantie - October 5, 2020 0
Dr. Bawumia has criticized NDC as a political party for being the brain behind Ghana’s economic downturn. In the voice of Bawumia, the ideas the...

‘I don’t have time to explain myself to fools like you’ – Patapaa’s wife...

Kofi Anokye, PhD - June 2, 2022 0
Liha Miller, the estranged wife of Patapaa, has responded after her husband called out blogger Zionfelix for creating issues in their marriage. Liha Miller has...

Ghana Was The Safest Country In Africa Until Akuffo Addo Came To Mess Up...

Kofi Anokye, PhD - October 16, 2020 0
Former President John Dramani Mahama has once again spoken about what he describes as growing insecurity under President Nana Akuffo-Addo in Ghana. According to him,...