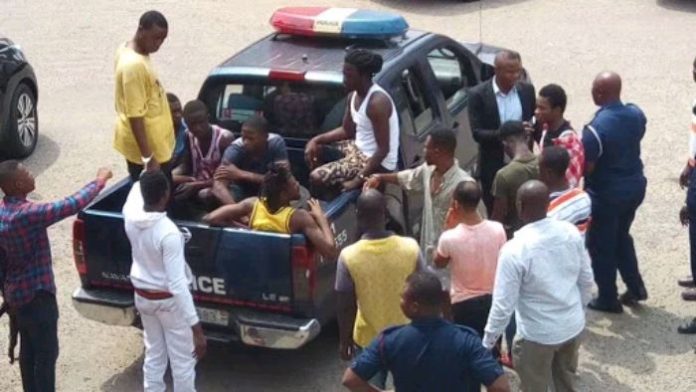 Police from the Accra Regional Police Command is said to have arrested some 97 people who flouted the nose masking wearing as directed by President Nana Akufo-Addo as been compulsory for all to follow and wear when going out into the public.

An operation that took place in Tudu, CMB, Farisco, Railways, and its environs saw many who flouted the law arrested and sent to the police station to be processed to court.

DSP Afia Tenge Accra Regional Police PRO in an interview with Mynewsghana reporter revealed that the police is poised on arresting all those who move without their nose mask on and rightly covering their nose and mouth.

The Regional Police command has embarked on a special operation this morning and have been able to arrest 97 persons who were not wearing the facemask.

“We arrested these persons around the Tudu area, railways, CMB, Farisco and its environs. What we observed is that when these people come into town it is either they have the facemask yet they will not put it on so usually you’ll see them putting the facemask in their bags or in their pockets.

“So they were all rounded up this morning and some were made to buy the facemask or take the facemask that were in their pockets and bags and wear them.

“They have all been brought to the regional Police command as we take a decision on them.”

All SIM Cards Which Are Not Re-registered By March 31, 2022 Will Be Blocked – Honourable Ursula Owusu

Sweet Maame Adwoa - July 9, 2020 0
Madam Comfort, the mother of Richard Sam, the final year student of KNUST SHS who passed away on Tuesday has finally broken her silence. According...

Video: Stonebwoy flaunts his cars, mansion and other Properties for the first time

Afia Schwarzenegger Is As A Witch – Counsellor Lutterodt Reveals

Nigerian Nurse Dies Of Coronavirus In The United States

Rebecca Bantie - April 29, 2020 0
A Nigerian healthcare worker, Ugonwa Okeke has died of Coronavirus in New Jersey. U.S.A. The graduate of the University of Nigeria Nsukka (UNN) relocated to...

Rebecca Bantie - October 15, 2020 0
Member of Parliament for Assin Central, Kennedy Agyapong has disclosed that some members within the New Patriotic Party (NPP) have called on his lawyer...