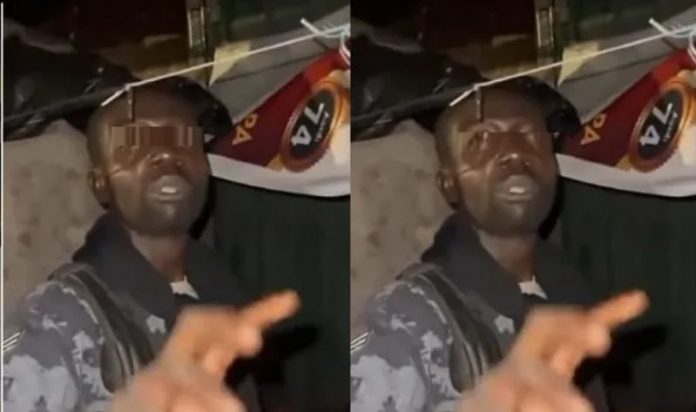 The Police Administration has interdicted Sergeant Isaac Sowah Nii, stationed at the Accra Regional Police Command, who was captured in uniform smoking a substance suspected to be a narcotic drug.

A police statement revealed that investigations are ongoing and the Sergeant will be taken through the necessary disciplinary and legal action.

In addition, he would be given the necessary psycho-social support in line with the new strategic police welfare policy.

The viral video which captured the police officer smoking an unknown substance in public in his uniform has been met with several reactions from the public.

Watch The Video Below:

watch the video below:

“Instead of a factory and hospitals, you build for us a prison?” – Ghanaians...

Kofi Anokye, PhD - May 13, 2021 0
The Church of Pentecost building a Prison Camp at Ejura has become the talk of Ghana since yesterday, especially on social media. And following social...

Rebecca Bantie - November 20, 2020 0
Officers of the Bureau of National Investigations have reportedly picked up two aides of former President Jerry John Rawlings from their homes. According to The...

Politics is not about looks – NPP man jabs Wontumi for attacking Naane Jane’s...

Kofi Anokye, PhD - July 10, 2020 0
A key member of the communications team of the New Patriotic Party (NPP), Francis Anom Boateng has expressed his disappointment in the Ashanti Regional...

Rev Obofour has been sleeping with his half-sister for the past 5 years (+...

Kofi Anokye, PhD - May 14, 2022 0
Manasseh The Word Changer has exposed Rev. Obofour for sleeping with his own half-sister for 5 years. He made these claims and shared images of...