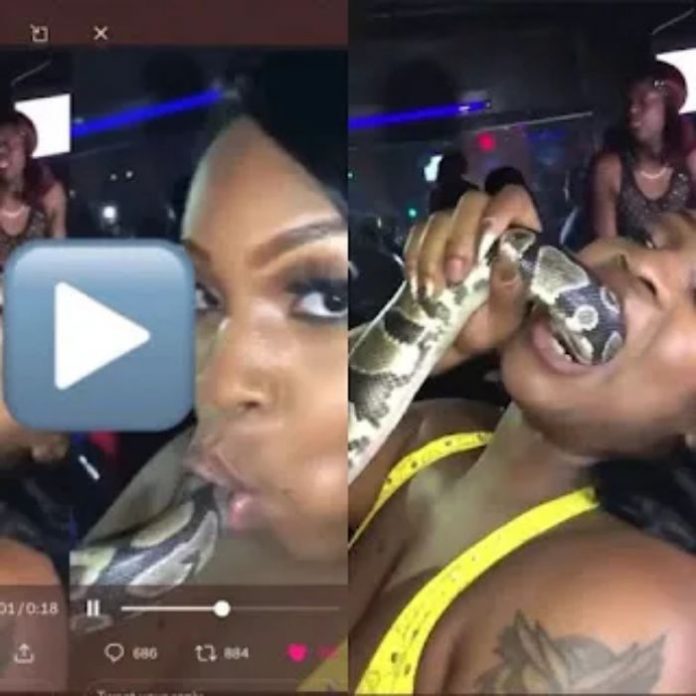 A viral video of a beautiful model swallowing a huge snake deep in her throat at a certain event in one of the foreign countries hit the Internet with massive reactions from viewers.

This video shocked everyone as it was posted to the Internet especially on Twitter by Musa Khawula.

Twitter fans keep talking about this video because snakes are dangerous creatures which must be feared by humans but this lady is so brave to have done this.

Video: If You Are Growing Old And You Have Money, You Need To Do Plastic Surgery  – Nana Ama McBrown

Video: Sarkodie should set up University so that rappers could come and learn the elements of real rap – Ruthy

Kumasi man in tears after thieves broke into his shop and stole 2 coffins...

Kofi Anokye, PhD - November 26, 2021 0
A video making the rounds on social media shows him lamenting how the alleged thieves cut open the wire mess fence before carrying the...

“Do not get close to my wife” – Grand P warns Congolese artiste over...

Kofi Anokye, PhD - June 13, 2021 0
Shatta Wale and Arnold Asamoah Baidoo clashed yesterday, June 12, 2021, in the studios of UTV during the United Showbiz program session. And in the...

Video: My church Pastor slept with me claiming his HOLY sperms can break my...

Kofi Anokye, PhD - April 19, 2021 0
Nowadays, some men of God would to great lengths to trick their church congregants by misleading them into believing that the crisis besieging them...

Girls’ Prefect of Mawuko SHS Who Was Caught on Leak Tape With Her Ho...

Rebecca Bantie - June 1, 2022 0
Report convened has it tha the Girls’ prefect of Mawuko Girls’ Senior High School who had her leak tape with her Ho Poly boyfriend...