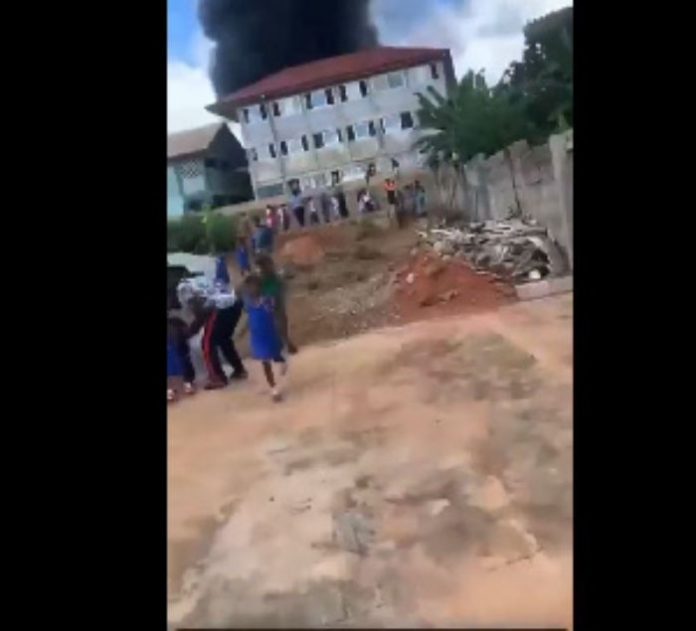 For some infants in the Kumasi Metropolis, the fire and explosion recorded at a plastic water storage factory in Atonsu on Friday, has left them with a traumatic memory on their minds.

This is visible in a video showing some kindergarten school children running helter-skelter for safety while a raging fire from a gas tanker threatened to extend to their school.

In the video sighted by GhanaCNN, the school children including toddlers are seen being rushed out of their school compound to safety by their teachers and residents of the neighbourhood.

Some of the children who were frightened by the situation are heard crying for their dear lives.

The teachers and residents in their bid to expedite the evacuation of the children are seen carrying some while they urged others to run on.

The recorder of the video, a young man who bravely helped with the evacuation is heard lamenting the sudden heat following the explosion of the gas content in the tanker.

“Jesus, Jesus, I can feel the heat on my body,” he exclaimed while holding a wailing child in his arm and running from the explosion.

The fire is said to have ignited during the discharge of Liquified Petroleum Gas (LPG) from a tanker at a plastic water tank manufacturing company close to the Kumasi Shoe Factory at Atonsu.

Three persons are reported to have sustained life-threatening injuries in the incident of Friday, June 17, 2022.

The timely intervention of Firefighters from the Atonsu regional office of the Ghana National Fire is said to have prevented the fire from spreading to areas around the vicinity.

We Can Equally Give Birth – LGBTQ+ Community To Critics

Rebecca Bantie - October 14, 2021 0
We Can Equally Give Birth – LGBTQ+ Community To Critics Ghanaian transgender, Va-Bene Elikem Fiatsi, who is also a board member of the LGBTQ+ Right...

The return of John Mahama; is it going to be the usual loot, share...

Kofi Anokye, PhD - May 26, 2020 0
Our politics has certainly evolved with new happenings at every step of the way. In fact, it was thought to be impossible for an...

Video: Sarkodie has tied the destinies of other rappers in the underworld, he was...

Kofi Anokye, PhD - July 17, 2021 0
A soothsayer claims rapper Sarkodie has tied the destinies of other rappers in the underworld. According to him, Sarkodie did that in order for him...