Home Religion Akufo-Addo Will Not Live To Celebrate His Victory In December – Odifour... 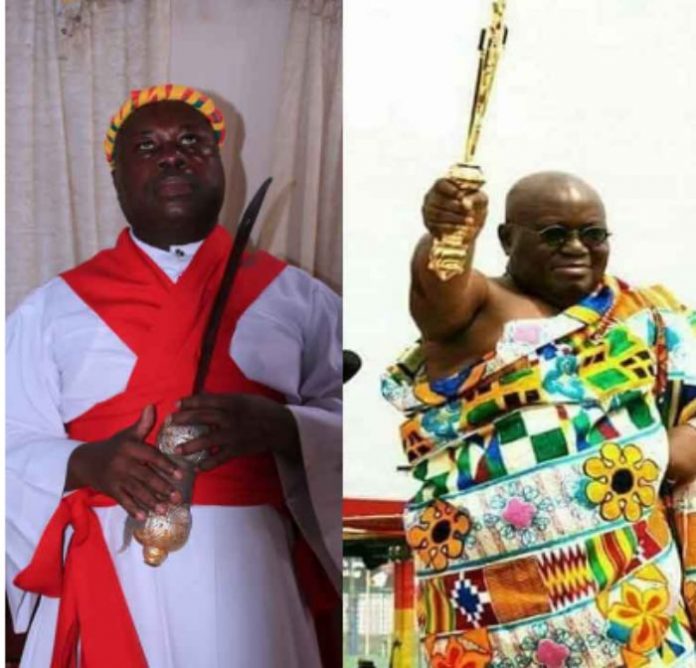 Odifour Kwabena Tawiah of Church of Rabbi has given a very profound prophecy about His Excellency Nana Akufo-Addo, the incumbent President of Ghana.

He said in a video that “Akufo-Addo will not live to see his reappointment as the President of Ghana after the December 7 elections”.

The popular clairvoyant revealed that though victory is assured for Nana Addo, he will be struck down with a deadly sickness that he may not survive even if there’s an intervention.

According to him, some allies and close companions of the President have planned to strike him with a sickness that will make him lose his life just after victory on December 7th.

As the elections approach, there have been countless prophecies about how the election is going to be and who will emerge as the winner. This one from Odifour Kwabena Tawiah adds to the many already given by other prophets.

Remember, earlier this year when the covid-19 was in its peak, a Nigerian Prophet, Emmanuel prophesied that Akufo-Addo will be down by the novel virus which will take his life.

Prophet Emmanuel in the video said; ” Ghana should pray for President Akuffo Addo. What am seeing concerning Nana Addo, He needs to pray. I saw him so sick and this sickness started from cough, chest. It looks as if he had chest issues but they refused to discuss it with the public.

With what I saw , the thing begun to trend as public news when it became worst. Instead of them to look at what the issue is , they begun to play politics with it and it became a very large issue. let’s pray so the president of Ghana will not die.”

Video: Lady goes wild after being SPOILT with alcohol in a house party – WATCH

Hot Video: I Will Always Insult John Mahama Because Of This – Rev Owusu Bempah Breaks Silence

NDC Made Mistakes In 2016, Ghanaians Forgive and Forget – John Dumelo

Rebecca Bantie - September 1, 2020 0
Ghanaian actor, John Dumelo who doubles as a Member of Parliament (MP) aspirant has disclosed that the opposition National Democratic Congress has learned their...

Kofi Anokye, PhD - September 7, 2020 0
Popular Ghanaian man of God, Kumchacha has said that he will definitely not marry a Christian woman in his next life. According to him, he...

Ikechukwu Obinna - June 11, 2020 0
A slay queen has heaped praises on married men by insisting they are relatively better than single guys as they give her peace and...