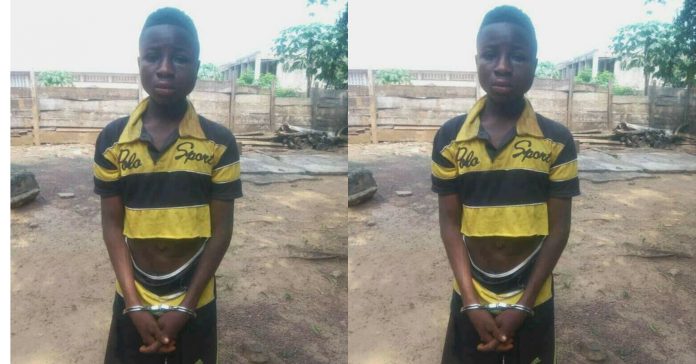 A 17-year-old Junior High School pupil, Emmanuel Gyan is in police custody for allegedly killing his own mother over his missing mobile phone memory card.

Gyan is said to have hit his 52-year-old mother, Faustina Agyeiwaa several times in the head with a pestle until she fell down, and thereafter he followed up with naked flames in attempts to burn her.

The incident is said to have happened at Wassa J.Y No.1. in the Sefwi Wiawso district on Monday, March 15.

The Sefwi Wiawso police who are holding the murder suspect said Gyan was arrested and brought to the station by his own father, Isaac Somuah, aged 58, assisted by one stephen Amponsah.

Somuah and Amponsah told the police that Gyan had accused his mother of taking his memory card, which the mother denied.

They said Emmanuel became furious and started attacking the mother with a pestle by hitting her on the head several times until she died on the spot.

Her body has since been deposited at the Bibiani government hospital mortuary awaiting autopsy.

How To Check Your Mobile Number On Any Network: MTN, Vodafone, AirtelTigo, Glo

Rebecca Bantie - January 26, 2022 0
How To Check Your Mobile Number On Any Network: MTN, Vodafone, AirtelTigo, Glo A lot of people tend to ask me this question a lot....

Rebecca Bantie - December 30, 2021 0
Bride confuses many as she storms her wedding with strange wedding dress An unknown bride has left many in awe after storming her wedding with...

“Mahama will win the elections but EC won’t give him the power to rule”...

Rebecca Bantie - November 30, 2020 0
With just 6 more days to the election, Prophet Nigel Gaisie has released another prophecy concerning the outcome of the elections. According to Nigel Gaisie,...

Government Forced Us To Increase Our Prices – MTN Shocks Ghanaians As They Offer...

Rebecca Bantie - January 6, 2022 0
Ghanaian Telecommunication Giants, MTN have offered an explanation as to the ridiculous upward adjustment in their call and data packages in recent times. Subscribers of...

Rebecca Bantie - August 2, 2020 0
The Asantehene, Otumfuor Osei Tutu II has referred to the President, Nana Addo Dankwa Akufo-Addo as a man in whom he is well pleased. Speaking...