Well, after hustling hard to the top, the lady has found him attractive enough to consider as a boyfriend.

The woman, known only as Sharon, sent a message to the man, Obi, in the discussion that Twitter influencer @jon d doe posted public in an effort to get in touch with him.

She explained that she obtained his phone information from their class’s group chat when Obi inquired how he managed to receive a message from her.

She was direct and pointed, listing some of the accomplishments of the young guy who had moved to another country.

She emphasised that Obi has made a home for both his mother and himself while living overseas.

Sharon, who was undoubtedly impressed by his achievements, proposed to him while he was still single.

Obi chuckled at her remark and playfully remarked, “She’s not okay.” But Sharon wouldn’t go away and reaffirmed that he had asked her out in high school.

Obi retaliated by berating her for having the audacity to get in touch with him now that he is prosperous after she disregarded him in the past while dating older, wealthy men.

Obi advised her to keep away from him and blocked her on WhatsApp after giving her a piece of his mind.

Read the full chat below: 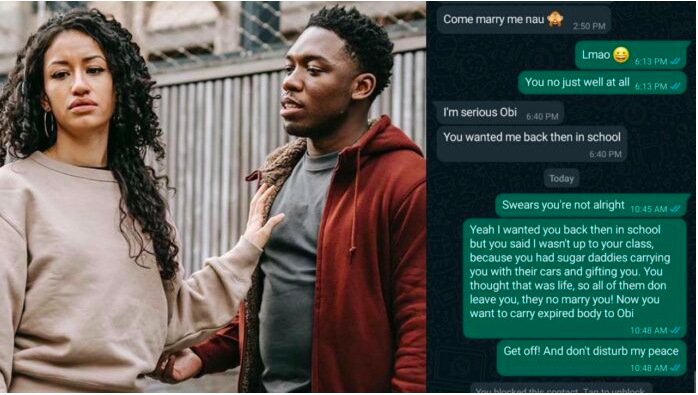 The BBC Ghana Staff - June 2, 2020 0
In a typical Ghanaian society, everything be it political or social is highly attributed to God's will and for that matter comes with a...

“Always try to send your boyfriend your n∨des as it spices the relationship” –...

Kofi Anokye, PhD - June 20, 2021 0
Singer KiDi has premiered a snippet of his new song “Send Me n∨des” off the Golden Boy Album to encourage the sharing and exchanging...

Nobody Can Control The Work We Do – Electoral Commission Fumes

Rebecca Bantie - May 12, 2020 0
The Electoral Commission has stated that it will go ahead and compile new voters register for the upcoming polls adding that no individual or...

Kofi Anokye, PhD - December 29, 2021 0
Founder and Leader of the Prophetic Chapel Hill, Prophet Nigel Gaisie has said he will give his prophecies no matter what the revelations, on...

Kofi Anokye, PhD - February 27, 2021 0
Celebrated Evangelist Diana Asamoah has been cited in video footage which has since gone viral on social media in which the gospel musician is...