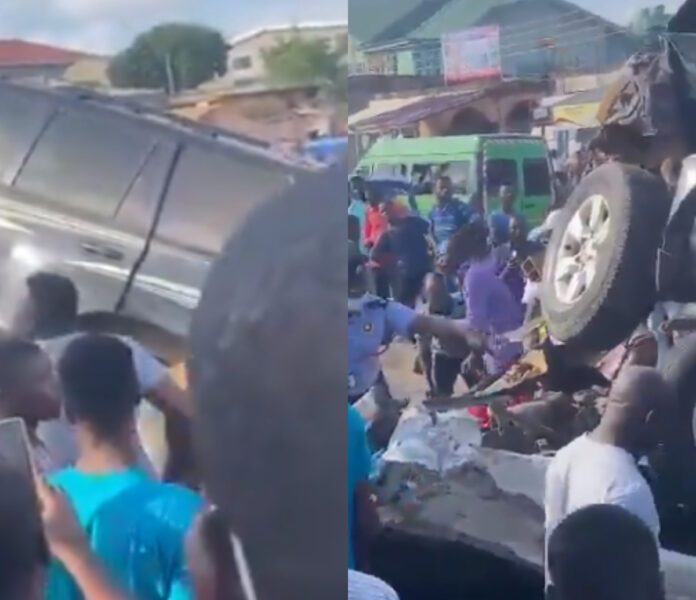 A mini bus with registration number AC-1219-18 was involved in a road accident on Wednesday afternoon, leaving several students injured leaving one(1) in a critical condition.

According to the mini bus driver name withheld, the bus, which had over 50 students on board, veered off the road and landed in a gutter after the break failed, this happened at a junction connecting to Nana Gyamfi’s stadium, between Ahweneɛ Junction and Anglican Church in Bekwai Municipal Assembly in the Ashanti Region.

The injured passengers were admitted at Bekwai Government Hospital but later discharge at 5PM .

Although hospital personnel declined to speak on record, they confirmed that 10 of the victims sustained various degrees of injuries, with others suffering fractures of the arm and leg.

News gathering here this morning indicates that, the mate who was in a critical conditions after the Victory International School bus veered off road has been confirmed dead.

‘I save £500 monthly working in UK; I’ll never return to Ghana till death’ – GH nurse in UK

I became a chronic drunkard because of juju in Kumawood – Actress Awo Yaa...

Kofi Anokye, PhD - April 12, 2021 0
For many a time, people in the Ghanaian movie industry have publicly admitted that the competition within the industry transcends beyond what they do...

Horace Logan White cause of death

Kofi Anokye, PhD - January 18, 2022 0
Horace Logan White, Radio Maker, and World War I veteran death has made a lot of people sad. Most people lamented over the...

Kofi Anokye, PhD - April 27, 2022 0
A video circulating on social media captures a beautiful Ghanaian bride struggling in her couture dress made with Kente. In the video, the bride could...